The Right Way To Get Your Cups Personalized Today! 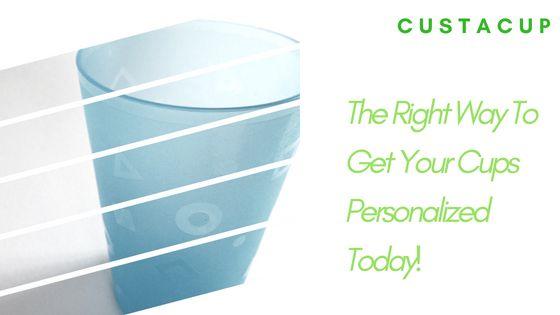 Getting creative should not be limited to the artists of the world – it should really spread out, because this world direly needs good content. Having something to look at or read that is artistically satisfying is becoming less and less common everyday in a world plagued by the has-beens and the followers venting out their negativity together.

What a refreshing change of pace it would be if you get to leave this mechanical utopia into the surreal, or even the ethereal for a second. The trigger could be anything that makes you think, or imagine, because we need more of that kind now! Here you are going to find how to make your personalized plastic cup a little more artistic, so that when somebody sips it by in the concrete jungles, it looks more of an extra-terrestrial artifact than just a cup of coffee.

1. Playing With Tones And Shades

Art does not belong on canvas’ and behind the trail of colors left behind exquisite brush strokes; it belongs in the eyes of the watcher.

That’s something to live by when you get your plastic cups customized to serve your clients better. Everyone is just branding, and leaving CTA’s on every piece of surface that they can. Maybe, this time you should try to leave behind something inspirational. Imagine the shock and awe of your customers when they see a rendition of the Renaissance art on your plastic coffee cup – it’s not just intriguing, but also adds some value of being unique, something that is going to stick on for a while.

2. Go Environmental – Ask For Some Mercy

Plastic cups are kind of a necessity in today’s plastic world – but at least use the ones that are recyclable.

Quotes like this with the right kind of motif could really bring some change into the mindset of the often numbed population – or maybe it won’t. But at least, you shall know that you tried – and amongst the thousands of coffee drinkers that order and take a sip even before they have actually met the eyes of the barista, maybe these are the kind of mediums you need to spread your thoughts and ideas.

3. Talk About The Injustices Of The World

Everyone has plenty – some have plenty of money, others have plenty of troubles. We aren’t born equal, there is equality just in the end. But at least to live, we should all have equality of opportunity, so that even the have nots can rise above their position of poverty in the society.

But to be honest, no one expects this kind of a message on their early morning custom plastic cup of coffee – but it’s probably the kind of jolt they need to try and make the world a better place. Maybe, if this becomes a thing – caffeine could one day wake us all up, just not the way we expected to.

When Freud talked about the superego, ego, and id, most of us were not paying attention for the first part of the lecture – and today, we are just putting up more and more walls around it, because we cannot seem to think of anything meaningful, beautiful, or even deserving enough to stand up for. But, if we all take this little initiative – who knows what kind of chance we are opening up into the world!